Screenshots of the tweets, posted on the morning of Monday 21 August, suggest that PlayStation Network databases were leaked, but this has neither been confirmed or denied by Sony. 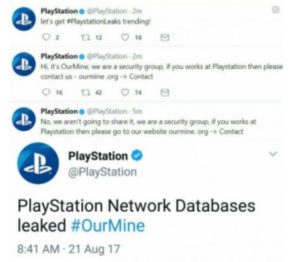 The tweets have now been deleted by PlayStation, which quickly took back control of its social media. The messages, which allegedly came from a hacking group known as OurMine, directed readers to the group’s contact web page and called for PlayStation employees to get in touch.

The group pledges not to share the leaks, stating that it is a security organization.

OurMine is a security hacker group based in Saudi Arabia. According to its website, it is a White Hat group that looks to help companies protect their security by exposing vulnerabilities.

Its website states that the group can ‘help you secure your network, show you all available vulnerabilities, and fix them all.’ It also notes that it has the capability to crack anything from a social media account to an entire network.

While the only confirmed security breach so far has been on PlayStation’s social media accounts, the tweeted threat that database information has also been leaked is likely to worry Sony and its customer base.

It is not the first time that Playstation has suffered a breach. The gaming giant suffered a leak in 2011, in which personal details from 77 million accounts were compromised and caused Sony to turn off the Playstation Network for 23 days.

Following the breach, Sony faced criticism over the way it handled the leak and was slow to warn users.

Another high-profile entertainment breach was under the spotlight recently which saw HBO suffer an attack and the loss of 1.5 terabytes of data, including a script for hit show Game of Thrones.