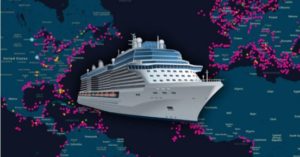 Pen Test Partners’ Ken Munro and his colleagues – some of which are former ship crew members who really understand bridge and propulsion systems – have been probing the security of ships’ IT systems for a while now and the results are depressing: satcom terminals exposed on the Internet, admin interfaces accessible via insecure protocols, no firmware signing, easy-to-guess default credentials, and so on.

“Ship security is in its infancy – most of these types of issues were fixed years ago in mainstream IT systems,” Pen Test Partners’ Ken Munro says, and points out that the advent of always-on satellite connections has exposed shipping to hacking attacks.

A lack of security hygiene

Potential attackers can take advantage of poor security hygiene on board, but also of the poor security of protocols and systems provided by maritime product vendors.

For example, the operational technology (OT) systems that are used to control the steering gear, engines, ballast pumps and so on, communicate using NMEA 0183 messages. But there is no message authentication, encryption or validation of these messages, and they are in plain text.

“All we need to do is man in the middle and modify the data. This isn’t GPS spoofing, which is well known and easy to detect, this is injecting small errors to slowly and insidiously force a ship off course,” Munro says.

They found other examples of poor security practices in a satellite communication terminal by Cobham SATCOM: things like admin interfaces accessible over telnet and HTTP, a lack of firmware signing and no rollback protection for the firmware, admin interface passwords embedded in the configuration (and hashed with unsalted MD5!), and the possibility to edit the entire web application running on the terminal.

They shared this with the public because all these flaws can be mitigated by setting a strong admin password, but they also found other issues that have to be fixed by the vendor (and so they disclosed them privately). 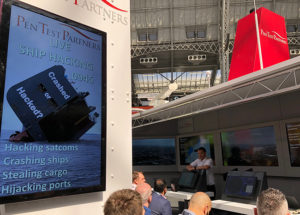 ECDIS – electronic chart systems that are used for navigation – are also full of security flaws. They tested over 20 different ECDIS units and found things like old operating systems and poorly protected configuration interfaces. Attackers could ‘jump’ the boat by spoofing the position of the GPS receiver on the ship, or reconfigure the ECDIS to make the ship appear to be wider and longer than it is.

“This doesn’t sound bad, until you appreciate that the ECDIS often feeds the AIS [Automatic Identification System] transceiver – that’s the system that ships use to avoid colliding with each other,” Munro noted.

“It would be a brave captain indeed to continue down a busy, narrow shipping lane whilst the collision alarms are sounding. Block the English Channel and you may start to affect our supply chain.”

The tracker does not show other details except the ship’s name and real-time position because they don’t want to help hackers, but it shows just how many vulnerable ships are out there. 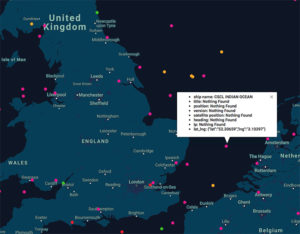 Hacking incidents in the shipping industry

Hacking incidents affecting firms in the shipping industry are more frequent than the general public could guess by perusing the news. Understandably, the companies are eager to keep them on the down-low, if they can, as they could negatively affect their business competitiveness, Munro recently told me.

Some attacks can’t be concealed, though. For example, when A.P. Møller-Mærsk fell victim to the NotPetya malware, operations got disrupted and estimated losses reached several hundred millions of dollars.

That particular attack thankfully did not result in the company losing control of its vessels, but future attacks might lead to shipping security incidents and be more disruptive to that aspect of companies’ activities.

“Vessel owners and operators need to address these issues quickly, or more shipping security incidents will occur,” he concluded. 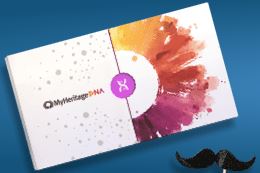 Consumer genealogy website MyHeritage said that email addresses and password information linked to more than 92 million user accounts have been compromised in an apparent hacking incident.

MyHeritage said that its security officer had received a message from a researcher who unearthed a file named “myheritage” containing email addresses and encrypted passwords of 92,283,889 of its users on a private server outside the company.

“There has been no evidence that the data in the file was ever used by the perpetrators,” the company said in a statement late Monday.

MyHeritage lets users build family trees, search historical records and hunt for potential relatives. Founded in Israel in 2003, the site launched a service called MyHeritage DNA in 2016 that, like competitors Ancestry.com and 23andMe, lets users send in a saliva sample for genetic analysis. The website currently has 96 million users; 1.4 million users have taken the DNA test.

According to MyHeritage, the breach took place on Oct. 26, 2017, and affects users who signed up for an account through that date. The company said that it doesn’t store actual user passwords, but instead passwords encrypted with what’s called a one-way hash, with a different key required to access each customer’s data.  So we ask “Why did it take so long to declare a breach”

In some past breaches, however, hashing schemes have been successfully converted back into passwords. A hacker able to decrypt the hashed passwords exposed in the breach could access personal information accessible when logging into someone’s account, such as the identity of family members. But even if hackers were able to get into a customer’s account, it’s unlikely they could easily access raw genetic information, since a step in the download process includes email confirmation.

In its statement, the company emphasized that DNA data is stored “on segregated systems and are separate from those that store the email addresses, and they include added layers of security.”

MyHeritage has set up a 24/7 support team to assist customers affected by the breach. It plans to hire an independent cybersecurity firm to investigate the incident and potentially beef up security. In the meantime, users are advised to change their passwords.

Why would hackers “Criminals” want to steal and then sell DNA back for ransom?  Hackers could threaten to revoke access or post the sensitive information online if not given money.  This data could be very valuable to insurance companies (Medical, and Life), mortgage companies, and then you ask “why”?  In a world where data is posted online, it could be used to genetically discriminate against people, such as denying mortgages or increasing insurance costs.  (it doesn’t help that interpreting genetics is complicated and many people don’t understand the probabilities anyway.)  This data could be sold on the down-low or monetized to insurance companies,  You can imagine the consequences: One day, I might apply for a long-term loan and get rejected because deep in the corporate system, there is data that I am very likely to get Alzheimer’s and die before I would repay the loan. In the future, if genetic data becomes commonplace enough, people might be able to pay a fee and get access to someone’s genetic data, the way we can now access someone’s criminal background.

The effort was part of a painstaking process that began by using DNA from one of the crime scenes from years ago and comparing it to genetic profiles available online through various websites that cater to individuals wanting to know more about their family backgrounds by accepting DNA samples, said Chief Deputy District Attorney Steve Grippi.