Hackable Apartments: How to Keep Our Communities Safe When Everything is Going Online

Hackable Apartments: How to Keep Our Communities Safe When Everything is Going Online
With the Internet of Things poised to revolutionize our systems and appliances just as the internet did with our information, the question remains—can we keep these devices safe? Today’s “smart” home demands a modern take on security and privacy as well as possible integrations with property management systems or even new voice activated consumer technology. Online security experts will assess the risk of the internet-enabled apartment and will present best practices to keep your residents and your enterprise safe from hackers. 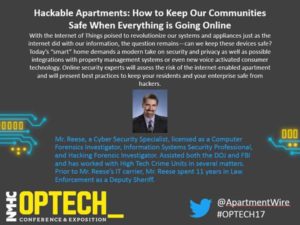 (Reuters) – The U.S government issued a rare public warning that sophisticated hackers are targeting energy and industrial firms, the latest sign that cyber attacks present an increasing threat to the power industry and other public infrastructure. 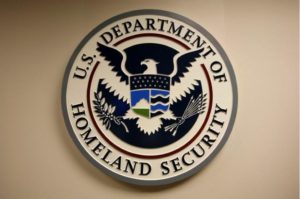 The Department of Homeland Security and Federal Bureau of Investigation warned in a report distributed by email late on Friday that the nuclear, energy, aviation, water and critical manufacturing industries have been targeted along with government entities in attacks dating back to at least May.

The agencies warned that hackers had succeeded in compromising some targeted networks, but did not identify specific victims or describe any cases of sabotage.

The objective of the attackers is to compromise organizational networks with malicious emails and tainted websites to obtain credentials for accessing computer networks of their targets, the report said.

U.S. authorities have been monitoring the activity for months, which they initially detailed in a confidential June report first reported by Reuters. That document, which was privately distributed to firms at risk of attacks, described a narrower set of activity focusing on the nuclear, energy and critical manufacturing sectors.

Department of Homeland Security spokesman Scott McConnell declined to elaborate on the information in the report or say what prompted the government to go public with the information at this time.

The FBI declined to comment on the report, which security researchers said described an escalation in targeting of infrastructure in Europe and the United States that had been described in recent reports from private firms, including Symantec Corp.

Lee, chief executive of cyber-security firm Dragos, said the report appears to describe hackers working in the interests of the Russian government, though he declined to elaborate. Dragos is also monitoring other groups targeting infrastructure that appear to be aligned with China, Iran, North Korea, he said.

The hacking described in the government report is unlikely to result in dramatic attacks in the near term, Lee said, but he added that it is still troubling: “We don’t want our adversaries learning enough to be able to do things that are disruptive later.”

The report said that hackers have succeeded in infiltrating some targets, including at least one energy generator, and conducting reconnaissance on their networks. It was accompanied by six technical documents describing malware used in the attacks.

Homeland Security “has confidence that this campaign is still ongoing and threat actors are actively pursuing their objectives over a long-term campaign,” the report said.

The report said the attacker was the same as one described by Symantec in a September report that warned advanced hackers had penetrated the systems controlling operations of some U.S. and European energy companies.

Symantec researcher Vikram Thakur said in an email that much of the contents of Friday’s report were previously known within the security community.

Cyber-security firm CrowdStrike said the technical indicators described in the report suggested the attacks were the work of a hacking group it calls Berserk Bear, which is affiliated with the Russian Federation and has targeted the energy, financial and transportation industries.

“We have not observed any destructive action by this actor,” CrowdStrike Vice President Adam Meyers said in an email.

It’s just a matter of time.

What You Should Know About the ‘KRACK’ WiFi Security Weakness

Researchers this week published information about a newfound, serious weakness in WPA2 — the security standard that protects all modern Wi-Fi networks. What follows is a short rundown on what exactly is at stake here, who’s most at-risk from this vulnerability, and what organizations and individuals can do about it.

Short for Wi-Fi Protected Access II, WPA2 is the security protocol used by most wireless networks today. Researchers have discovered and published a flaw in WPA2 that allows anyone to break this security model and steal data flowing between your wireless device and the targeted Wi-Fi network, such as passwords, chat messages and photos. 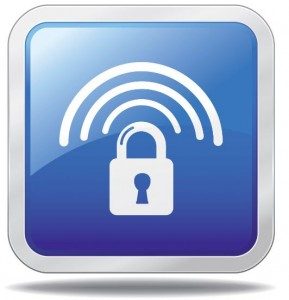 “The attack works against all modern protected Wi-Fi networks,” the researchers wrote of their exploit dubbed “KRACK,” short for “Key Reinstallation AttaCK.”

“Depending on the network configuration, it is also possible to inject and manipulate data,” the researchers continued. “For example, an attacker might be able to inject ransomware or other malware into websites. The weaknesses are in the Wi-Fi standard itself, and not in individual products or implementations. Therefore, any correct implementation of WPA2 is likely affected.”

What that means is the vulnerability potentially impacts a wide range of devices including those running operating systems from Android, Apple, Linux, OpenBSD and Windows.

As scary as this attack sounds, there are several mitigating factors at work here. First off, this is not an attack that can be pulled off remotely: An attacker would have to be within range of the wireless signal between your device and a nearby wireless access point.

More importantly, most sensitive communications that might be intercepted these days, such as interactions with your financial institution or browsing email, are likely already protected end-to-end with Secure Sockets Layer (SSL) encryption that is separate from any encryption added by WPA2 — i.e., any connection in your browser that starts with “https://”.

Also, the public announcement about this security weakness was held for weeks in order to give Wi-Fi hardware vendors a chance to produce security updates. The Computer Emergency Readiness Team has a running list of hardware vendors that are known to be affected by this, as well as links to available advisories and patches.

“There is no evidence that the vulnerability has been exploited maliciously, and Wi-Fi Alliance has taken immediate steps to ensure users can continue to count on Wi-Fi to deliver strong security protections,” reads a statement published today by a Wi-Fi industry trade group. “This issue can be resolved through straightforward software updates, and the Wi-Fi industry, including major platform providers, has already started deploying patches to Wi-Fi users. Users can expect all their Wi-Fi devices, whether patched or unpatched, to continue working well together.”

Sounds great, but in practice a great many products on the CERT list are currently designated “unknown” as to whether they are vulnerable to this flaw. I would expect this list to be updated in the coming days and weeks as more information comes in.

Some readers have asked if MAC address filtering will protect against this attack. Every network-capable device has a hard-coded, unique “media access control” or MAC address, and most Wi-Fi routers have a feature that lets you only allow access to your network for specified MAC addresses.

However, because this attack compromises the WPA2 protocol that both your wireless devices and wireless access point use, MAC filtering is not a particularly effective deterrent against this attack. Also, MAC addresses can be spoofed fairly easily.

To my mind, those most at risk from this vulnerability are organizations that have not done a good job separating their wireless networks from their enterprise, wired networks.

I don’t see this becoming a major threat to most users unless and until we start seeing the availability of easy-to-use attack tools to exploit this flaw. Those tools may emerge sooner rather than later, so if you’re super concerned about this attack and updates are not yet available for your devices, perhaps the best approach in the short run is to connect any devices on your network to the router via an ethernet cable (assuming your device still has an ethernet port).

From reading the advisory on this flaw, it appears that the most recent versions of Windows and Apple’s iOS are either not vulnerable to this flaw or are only exposed in very specific circumstances. Android devices, on the other hand, are likely going to need some patching, and soon.

If you discover from browsing the CERT advisory that there is an update available or your computer, wireless device or access point, take care to read and understand the instructions on updating those devices before you update. Failing to do so with a wireless access point, for example can quickly leave you with an expensive, oversized paperweight.

Finally, consider browsing the Web with an extension or browser add-on like HTTPS Everywhere, which forces any site that supports https:// connections to encrypt your communications with the Web site — regardless of whether this is the default for that site. 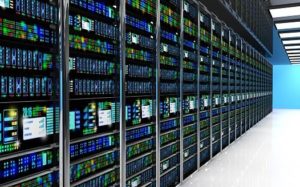 The vulnerable server was spotted on Sept. 29 and researchers said they notified the company on Oct 5. and by Oct. 6, the bucket had been secured. Kromtech pointed out that the company’s privacy page stated that patients have the right to be notified when their information is being accessed and that it’s unclear how or if patients will be notified of the incident.

The HIPAA Breach Notification Rule requires covered entities to notify affected individuals, HHS, and in some cases, the media of a breach of unsecured PHI. Most notifications must be provided without unreasonable delay and no later than 60 days following the discovery of a breach. fines can range from $100 to $50,000 per violation (or per record), with a maximum penalty of $1.5 million per year for each violation.

Some researchers aren’t surprised that admins are misconfiguring Amazon S3 buckets and leaving them exposed with the rapid adoption of the new technology.

“The Amazon S3 bucket can be easily switched from private to public access – with public being the default.” Josh Mayfield, platform specialist, Immediate Insight at FireMon said. “With the speed that organizations are moving to AWS and cloud infrastructure, it is only natural to miss something.”

Mayfield said companies should have policy controls that are automated irrespective of future technology so that admins don’t have to sacrifice security for speed and that added that policy management consoles with the flexibility to handle heterogeneous infrastructures and devices are invaluable.

Other researchers weren’t as forgiving. AlienVault Security Advocate Javvad Malik said the issue of misconfigured cloud services is a growing problem and a lack of skill may be to blame.

“As more and more companies migrate datasets to the cloud, it is becoming apparent that many lack the cloud skills needed to secure the cloud infrastructure, gain assurance that the cloud infrastructure is secured appropriately, or monitor their cloud environments for unauthorized access,” Malik said. “While cloud can bring benefits of having a resilient infrastructure, security cannot be outsourced, and much of the responsibility remains with the customer.”

Malik added that unfortunately, the people affected the most are the patients who have had their sensitive information exposed. Researchers agreed mistakes like this emphasize the impact breaches like this can have on individuals.

The narrative surrounding breaches is so often defined by the financial implications, but the impact of medical records being leaked on individuals could be equally if not more damaging,” DomainTools Senior Sybersecurity Threat Researcher Kyle Wilhoit said. “Revealing potentially sensitive personally identifiable information could impact an individual’s employment or it could be used by criminals/state entities for targeted attacks, such as spear phishing.”

Wilhoit said Medical organizations need to start taking the data they have access to as seriously as financial organizations, all assets must be discovered and tested against current vulnerabilities and patches must be deployed quickly.