Employees: The Weakest Link in Cybersecurity 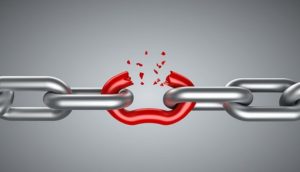 From day one, we have said that employees are the weakest link in the cybersecurity chain for an organization. In a recent webcast, Michael Gelles and Robert McFadden of Deloitte Consulting LLP highlighted just how big of a threat “insiders” are to an organization’s cybersecurity well-being.

The term “insider threats” often refers to individuals who use their knowledge of or access to an organization and its systems to deliberately perpetrate wrongdoing, whether fraud, sabotage, theft or a violent act. These individuals may be current or former employees, contractors, or employees of third-party service providers.

In a study titled  “The Widespread Risk of Insider Threats” the following data was collected:

Let’s take a moment to review the above statistics. I think it’s safe to say that we are our own worst enemy. There are two trends we can take away from the study. One, we aren’t doing a good enough job (statistics actually show that we aren’t doing this job at all) of monitoring the activity of our employees. With the evident threat of cybersecurity issues being in the limelight as of late, you would think this would be a major priority of managers and high-level executives. However, this leads us to our second trend that we can identify. If an employee has a negative experience at work, such as being flagged for their suspicious work behavior, statistics show that nine out of ten cases could lead to an insider threat occurrence. That has to be an extremely daunting area of concern for managers and executives to analyze. How do you manage your insider threats without unintentionally creating an insider threat?

The stakes of becoming the next big breach in the news are higher than ever. Cybercriminals are making very lucrative careers out of breaching networks and stealing personally identifiable information. As we become an increasingly information-based economy, securing your network and sensitive data are more critical than ever to any organization’s survival. In 2015, it was estimated that 58% of all data security threats came from the extended enterprise (employees, ex-employees, and trusted partners). Statistics also showed that an insider attack costs a company over $400,000 per incident and approximately $15 million in annual losses per company. Some incidences have gone on to cost a company more than $1 billion.

Whether you are dealing with a malicious, exploited or careless insider, they all end with unauthorized users having access to your company’s sensitive data. Below are “12 Steps to Future Proofing Your Internal Security” from IS Decisions:

Customers are increasingly going to be scrutinizing companies on their approach to security, so it helps to be able to show them that you have the right attitude about keeping their data safe.